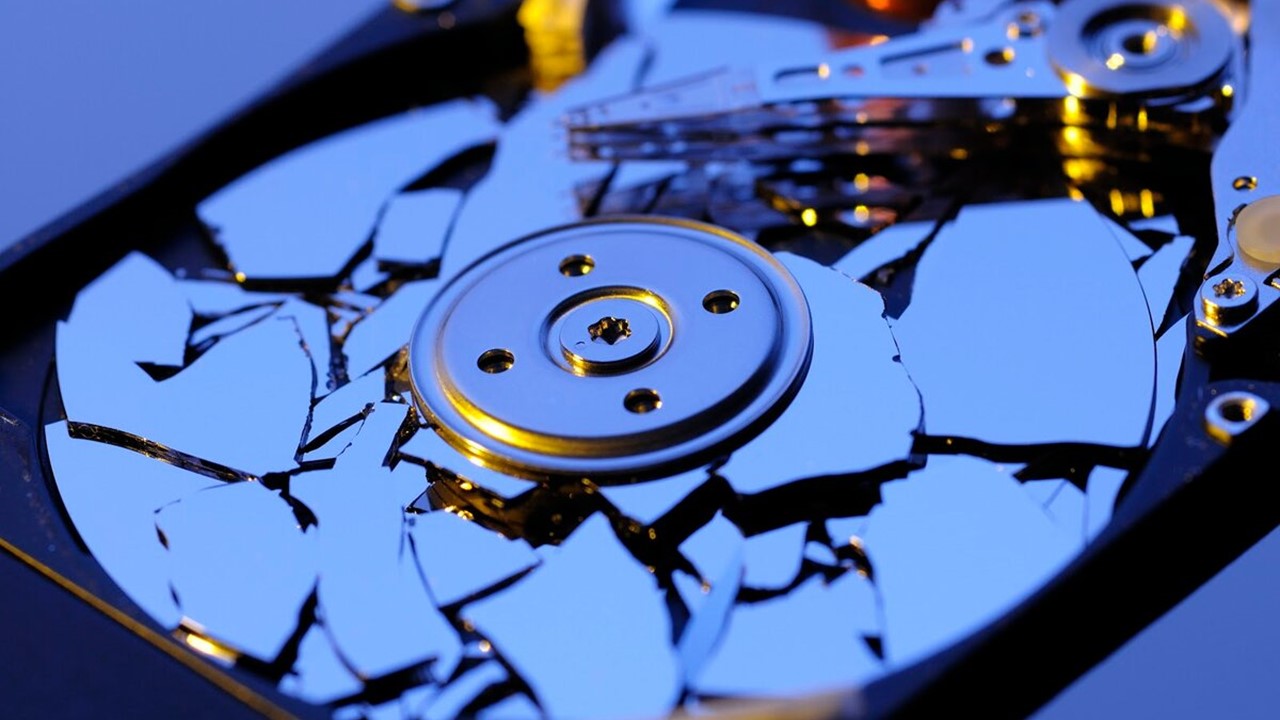 If you’ve ever had to dispose of sensitive documents, you’ve probably used a shredder. It’s the go-to method for ensuring nobody can get their hands on your confidential paperwork. If someone does get hold of your shreddings, it’s highly unlikely they’ll be able to piece together anything of value (particularly if you’ve used a cross-cut shredder, which not only shreds documents into strips but also slices those strips into smaller pieces). The highest-level shredders, approved for destruction of Top Secret government files, process paper into fine confetti which you’d be hard-pressed to recover anything from at all.

So if shredding works for paper, why wouldn’t it work for something else – something like a hard drive? “Data is digital,” you may be thinking, “so if you shred the drive then that data can’t possibly be read?” Well, yes and no. This issue has to do with how data is stored on a magnetic hard drive, and why shredding it doesn’t prevent it from being recovered. Read on for a lesson in magnetism!

A magnetic personality
A hard drive platter may look like a smooth circular disc, but it’s actually covered with grains. Obviously not the edible kind, but tiny magnetic grains of a metallic cobalt alloy. When we say tiny, we mean tiny: each grain is mere nanometres in size, and a drive platter is covered with billions upon trillions of them. These grains can be either magnetised or not magnetised. Each grain is like a switch that can be either on or off – or to put it another way, one or zero. Sound familiar? Zeroes and ones are of course how binary information is stored within computer systems, and it’s these magnetised-or-not metal grains which store your data. This magnetism doesn’t stop when your computer is switched off, allowing data to be stored over long periods of time.

So what does this have to do with shredding? When you shred a piece of paper into tiny bits, you’re shredding the words on that paper into letters, or less than letters, such that the words can’t be read anymore. But what if those words were written in smaller font size? You’d need to shred that paper to a finer degree to ensure nothing could be read. As the font size gets smaller, the effort necessary to destroy that information grows, until the size eventually surpasses even the finest possible shredding equipment. Supposing there was no physical limit to the text size a printer could print, one could continue to make the written text smaller and smaller – to the point where even using the best shredder money can buy, you’d still be able to read entire novels’ worth of content from each shredded fragment.

But this is no mere hypothetical. We’ve already learned how hard drives store their data, and magnetised grains on a platter aren’t so different from ink on a page – aside from one key factor. In the space of a single word on a page, gigabytes of data could be stored on a drive platter. Even finely shredding that platter would leave large quantities of data on each shredded piece, just like in our scenario above with the microscopic font. There’s an obvious caveat here. A piece of paper can be read with the human eye, whereas a hard drive needs to be attached to a computer in order to surrender the data it holds – and a hard drive that’s been shattered into tiny pieces is in no condition to be plugged into your PC. However, technology does exist that can read the magnetic data from drive fragments without needing said fragments to be part of an intact platter. Digital forensics experts use this method to recover case-critical information in circumstances where hard drives have been destroyed, either deliberately or accidentally. However, this technology could just as easily be used by someone with malicious intent. The key takeaway here is that if you shred a hard drive, the data has merely been broken up into bits. It can still be recovered, and you don’t want that.

Total wipe-out
The solution is simple. Hard drives should be wiped before you shred them. In our above scenario, this would be akin to erasing the words from a page before shredding it; no matter the effort put in to reassemble that page like a flimsy jigsaw puzzle, those words no longer exist and will never be read again. You might be wondering: what’s the point of using a shredder if you’re going to wipe the drives first anyway? Surely the data is gone and there’s no need to waste the further effort? Well, you’d be right. We’re actually not big fans of drive shredding here at Varese; we prefer to use drive destroyers to bend and break wiped hard drives ready to be recycled, without the hassle and mess that comes with shredding them to bits. As for wiping the data, we previously wrote about the best way to go about this in our piece on what to do with your old hard drives. In a nutshell, you should consider performing a Secure Erase on your drives, or if you don’t have the time or the willpower for that, invest in a degausser to do the job quickly.

There are other issues with hard drive shredding, but we won’t get into those today. Something to bear in mind, however, is that the issue of data surviving on tiny shredded fragments is actually due to get worse over the next few years. A technology known as a heat-assisted magnetic recording is currently in development and looks set to be the next big step in achieving ever-larger hard drive capacity. Higher capacity drives with the same physical size mean more data per square inch, which naturally means more data on each tiny shredded fragment. Even more alarmingly, although HAMR technology may not be available to consumers yet its successor, heated dot magnetic recording (HDMR), is well into development. Magnetic storage looks set to grow ever denser over the coming decade, and – pun very much intended – shredding just won’t cut it.